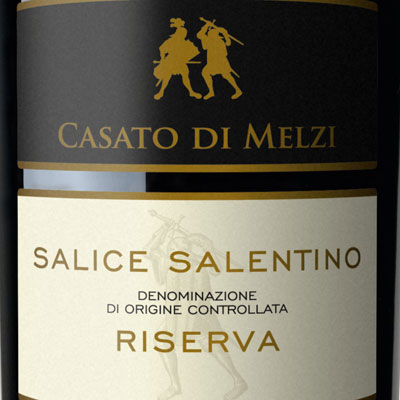 Cultivation
Most of the land is planted with small trees (around 5.500 trees per hectare), of which the 25% is cultivated to espalier.

Soil
The soil composition is mixed, slightly sandy, and it has a medium PH of 7.5

Vinification
Fermentation takes place in 4ml diameter autoclaves to facilitate the development of narrow and wide marc caps, which, under controlled temperatures of 15 – 20C°, helps the withdrawal of the colours and extracts. Separation of the most from the marcs. Refinement on the lees, malolactic fermentation and aging in steel.
Aging in barrels for 24 month and in stainless steel tanks for 12 months.

Historical background
The name of this wine comes from the homonymous city located north of Lecce, in an area dominated by vineyards and olive trees, scattered with the typical “masserie” and ancient patrol towers.
The red wine Salice Salentino is made with the grapes Negroamaro (dominant),  black Malvasia from Brindisi and black Malvasia from Lecce.
Negroamaro is an ancient grape in the area: cultivations in southern Puglia have focused almost entirely on this variety since the VI century B.C..
The wine produced from it is characterised by diverse hues, from ruby to garnet red.
The name does not have origin, as some argue, by the dialect “niuru maru”, used by the locals, nor by its bitter taste, but from two words both for the color black: the Latin Nigra and the Greek Mavros, used together to emphasize the intense deep black, both of the skin and of the wine made.
The other two grapes present in Salice Salentino belong to the family of Malvasia, which originated in Greece and later arrived in Puglia from Morea, precisely from the city of Monembasia.
Today almost only two varieties are still cultivated: black Malvasia from Lecce and black Malvasia from Brindisi, which have many features in common. The taste difference in the juice of the two Malvasia is due to climatic factors more than hereditary ones.